2014 – Developed the scenarios for a series of short animations for Tavaana Tech on issues related to Digital Security.

2014 – Contributed to the Internet Freedom: Snapshots of the Case of Iran report (pdf).

While one may argue that change in a society may be more associable to fringe elements than the common risk averse, the possibility that the current limitations may have converted the Internet in Iran from a household item perceived as a safe practice into a habit which requires risk-taking is alarming. To add to the extent of the challenge, the Iranian state media continually portrays the Internet as the cause of social and personal despair. Such circumstances do not constitute proper grounds for mass participation and involvement.

December 2014 – Interviewed by IranWire on the technological details of Skype Translator (Persian).

December 2014 – Interviewed by IranWire on the new Iranian initiative to enforce user authentication before Internet use (Persian).

December 2014 – Quoted by DW-World on a piece regarding Soheil Arabi’s execution sentence for “blasphemous” content on Facebook (Persian, German).

December 2014 – Presented the film Her, by Spike Jonze, in NaMaNaCinema, a film club based in Toronto.

Arash Abadpour, NaMaNa Cinema, Her (Spike Jonze), Part I from Namanacinemaa on Vimeo.

November 2014 – Interviewed by Radio Farda on the suggestions of the Ministry of Communications and Information Technology that mandatory user authentication is to be established in Iran (Persian).

November 2014 – Interviewed by BBC Persian on the integration of Tor Network with Facebook (Persian).

October 2014 – Interviewed by GLobal Voices Online on the continued detection of Saeed Malekpour in Iran.

September 2014 – Interviewed by Iran Wire on the ongoing cyberwar between Iran and Israel (Persian).

September 2014 – Appeared in #BBCtrending video on the Ice Bucket Challenge in Iran.

August 2014 – Appeared on a BBC Persian program on the ice bucket challenge.

July 2014 – “Tyranny of Like“, guest article at Article 19 on the impacts of Facebook on online activism in Iran.

While the Internet is praised as a mechanism for mass communication in the global world, there are strong indications that the cyberspace is in fact composed of many isolated islands. It is a well iterated observation that the “unfollow” and “unfriend” buttons in the popular social media in fact make it convenient for people to assemble a group of “friendly friends”. This group will always be friendly towards anything that the user produces and will only post friendly pieces of content. The fact that content in the social media is in fact hand-picked by algorithms trained to only return “notable” content allows any user to in fact erect a virtual island in which her assumptions and prejudices are always approved. In other words, the social media has allowed us, more than ever, to search the most remote areas of the planet for people who would approve us. Facebook is the opium of the masses. It enables a sharp descent into deep harmony with an artificially filtered world, to a world in which everyone agrees with us.

June 2014 – Discussed cyber security and its significance for social and political activism in a televised National Council Iran meeting in Toronto (Persian).

June 2014 – Wrote a piece for the BBC Persian Observers’ Blog on the security concerns of a method circulated on the web for adding Persian support to iOS, “Persian Keyboard for iOS; for what reason and for what cost?” (Persian).

Note: iOS supports an Arabic keyboard, in which four Persian-specific characters are accessed by the user keeping her finger on other characters for a second or two. The circulated method claims to add the complete Persian keyboard to the operating system, through requiring an external tool as well as modifications which this piece suggests result in security concerns.

March 2014 – Contributed to a series of podcasts on Technevis on issues related to the use of the cyberspace in Iran (Persian).

May 2014 – Discussed digital security in an Iran Security (Baroo) podcast. 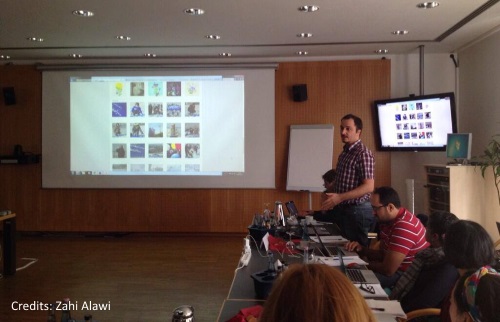 May 2014 – Interviewed for the Voice of America report on the sentencing of 8 Iranian Facebook users to a total of 123 years.

May 2014 – Appeared in a video for Philia not Phobia, a campaign for advocating against homophobia (Persian audio, English subtitles)

We should think about the Berlin wall and other walls and that these walls have been destroyed and people have found themselves in a better situation.

March 2014 – Co-authored an extensive report on the Persian blogesphere titled “Whither Blogestan: Evaluating Shifts in Persian Cyberspace” (pdf) – Reactions: “GV Face: What Ever Happened to Iran’s Bloggers?“, Persian report on Radio Farda, “The Iran Expert May Not Exist, But the Persian Blogosphere Does“, “The decline of Iran’s Blogestan” on The Washington Post, Persian coverage on Radio Farda, “The Rise and Fall of Iran’s Blogestan“, Coverage in Iranian media: Mashregh, Weblog News, Coverage in Arab media: Sharq Parsi, International Business Times, “Excavating The Ruins Of Blogestan” 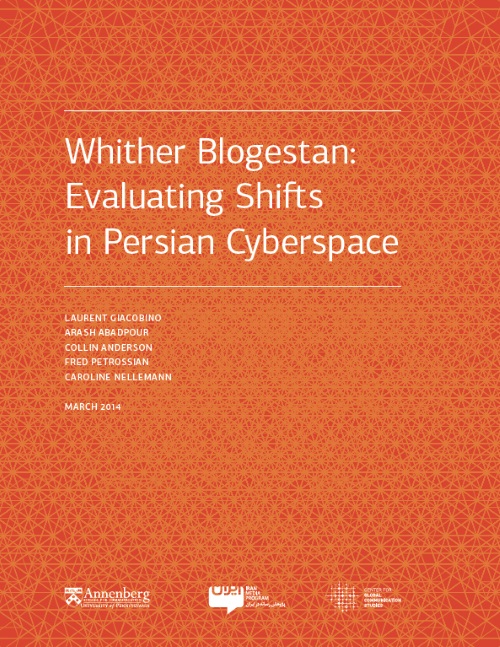 April 2014 – Spoke on a panel named #RevolutionIn140Characters in the Workshop on Social Media and National Security at the Canadian Forces College.

March 2014 – Was among the signatories of an open letter demanding the release of Bahareh Hedayat and Maryam Shafipour (Persian).

March 2014 – “Surveillance: a symptom of unchecked power“, Interviewed by DW-World on the inclusion of NSA and GCHQ in the 2014 list of Enemies of the Internet by Reporters Without Borders.

January 2014 – Featured on the “Thoughts from the Global Dialogue” series (video).